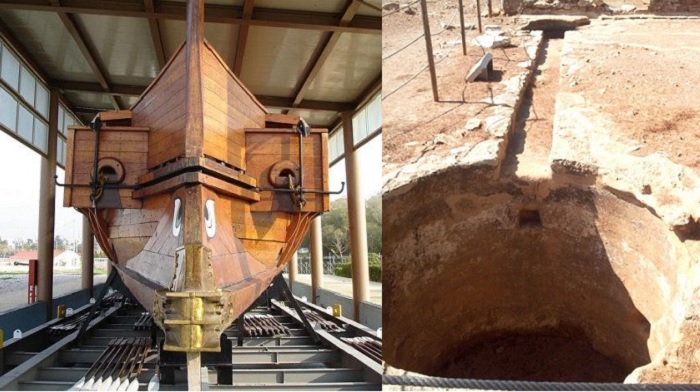 Lavrion Greece, is a good starting place for a yacht charter tour in the Cyclades island, but whats the history of this place? Laurion lies approximately 50 kilometers (31 miles) south of Athens between Thoricus and Sounion and it was famous in ancient times for its productive mines.

Silver, copper, lead and even rare metals have been mined there since the Late Neolithic Period, around 3200 BC at least. Then mining mysteriously stopped there for a period of a few centuries.

However, the mines were revived in the sixth century BC and thrived during Greece’s Classic Period, with slaves doing the laborious mining of the metals. The city-state of Athens exploited the mines to the full, and they became a vital source of revenue.

In the 4th and 5th centuries BC, the output of the Laurion mines represented fully 25 percent of the Athenian state’s annual wealth.

According to Dr. Elias Konofagos, a chemical engineer and member of the energy committee of the Academy of Athens, the annual gross revenue from just the silver and lead from the Laurion mines at that time was 920 talents.

The talent (“talanton”) was an ancient unit of mass and a commercial weight, as well as representing corresponding units of value equivalent to these masses of a precious metal. The 920 talents were equivalent to 5,520,000 Attica drachmas, with those silver coins each weighing 4.36 grams.

At the beginning of the fifth century BC, the annual output of the Laurion mines was an astounding 20,000 kilograms of silver and 8,000 tons of lead. Archaeologists have discovered almost 200 different mines and shafts in the area dating back to the years 480-250 BC.

Themistocles was elected Archon of Athens in 493 BC, and one of his plans was to make Athens a leading nautical power. He also built a wall across Piraeus to defend the Attican territory. Soon, the Port of Faliro was replaced by the Piraeus Port.

It is estimated that 20,000 slaves worked in the mines to provide the silver for the fleet that Themistocles demanded. The end result of all their backbreaking toil was that Athens became a fearsome naval power.

In 480 BC, the vast Persian army defeated the Greek forces at the Battle of Thermopylae, invaded parts of Greece and threatened the Athenian state. Themistocles proposed that since the Greeks were outnumbered by the Persians, they should avoid fighting on land.

He then suggested that the Persian king Xerxes’ army should be stopped at sea. The Athenian-dominated Allied navy engaged the Persian fleet in the nearby straits of Artemisium; unfortunately, the Greeks suffered heavy losses there and retreated.

Themistocles insisted that the Persian fleet should be brought to battle again. After a subterfuge on the part of the sly Themistocles, King Xerxes was lured into a titanic battle at sea, leading his Persian fleet straight into the Straits of Salamis.

Once inside the narrow straits, the Persian ships could not maneuver, and they became completely disorganized. The Greek fleet was then able to snatch the opportunity to obliterate the Persian naval forces and score a decisive victory for Athens and Greece.

It was September 22, 480 BC — a day which became one of the most momentous dates in the history of ancient Greece.

One year later, without a navy to support his troops, the Persian King Xerxes retreated to Asia, forever abandoning his ambition to conquer Greece.

Many historians believe that a Persian victory would have stopped the progress of ancient Greek civilization, and by extension western civilization as a whole, leading them to argue that Salamis is one of the most significant battles in human history.

The ships which helped to win the Battle of Salamis were paid for with silver from the mines of Laurion. So it would be safe to say that these mines in the south part of Attica, and the terrible labor of the enslaved men there, contributed significantly to the saving of western civilization.

The rich mines of Laurion stopped operation only in the year 1992, and today, its property belongs to the Ministry of Culture. The ancient mines, which figure so large in Western history, are now part of the Laurion Technological and Cultural Park.

Source: How the Mines of Laurion Saved Ancient Athens — and Western Civilization | GreekReporter.com