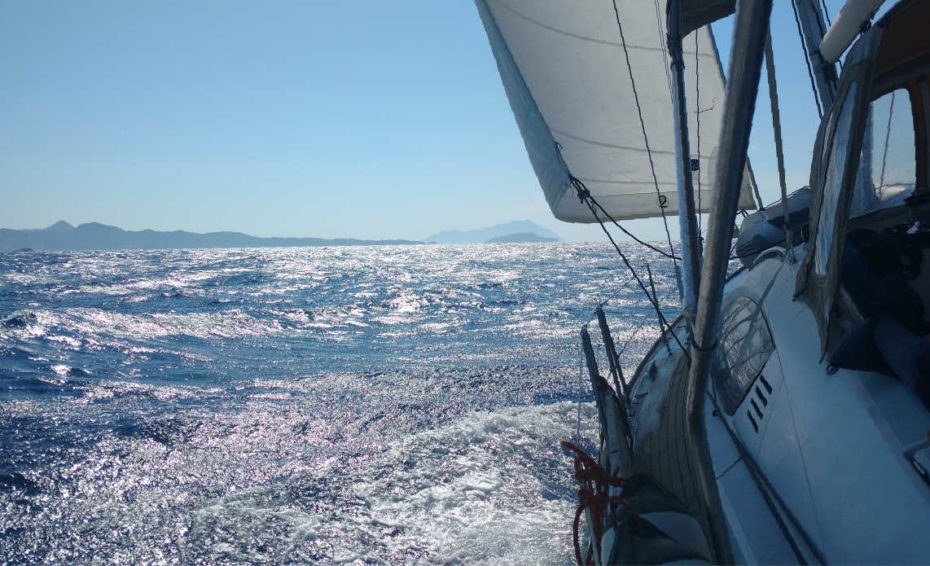 The etesians Meltemi winds are a dominant weather influence in the Aegean Basin and have to be considered when chartering a yacht in Greece.

In a nutshell, the Meltemi is a (very) strong North wind. It is an dry, seasonal wind that appears all over the Aegean but is the strongest in the Cyclades. We call them Meltemi or Meltemia, which is the plural form of the word in Greek.

Depending on where in Greece you are, they may come from the north, north-east or north-west. If you want to avoid the Meltemi and want to sail in Greece in July or August I would suggest the Ionian Sea or the Argo-Saronic Islands. Less windy but still under the influence of the Meltemi are the Dodecanese islands and the Sporades.

When do the meltemi winds happen?

The meltemi winds in Greece are seasonal. They are strongest during July and August, but you may also come across them in June or September.

If you are visiting Greece in spring or late September, you will probably miss them, though it’s not certain.

The Meltemi generally blows all day and sometimes all night, typically being at its strongest during the afternoon and early evening. This is why, in the typical Greek fashion, I suggest you bring a light jacket with you when sailing, even if you are visiting in summer!

There’s no guarantee over how many days the meltemi will go on for. It can be just a few days, but it can also blow all week and even multiple weeks in a row.

Which Greek islands are most affected by the meltemi winds?

There are several windy Greek islands. The groups of islands that are more affected by the Meltemi are the ones in the Aegean, specifically the Cyclades, and the Dodecanese.

People who have visited Mykonos, Santorini, or Naxos in summer will be familiar with the Cyclades wind. If you have been to Andros or Tinos, you may have experienced some of the strongest Meltemi winds. These two islands are among the windiest in the Cyclades.

Other islands that can be impacted by the Meltemi are, the Dodecanese the islands of North-eastern Aegean, and the Sporades (less influenced). The Aegean side of Evia island is also very exposed, as is an open seas area between the Sporades and Andros.

Will the meltemi wind affect my holiday?

When the Meltemi is blowing full force you won’t be able to sail in the Cyclades. Many Cyclades sailing weeks booked in July and August have been altered to an Argo-Saronic sailing tour.

When sailing from Athens there is always the last-minute possibility to change the sailing itinerary from the Cyclades to the Argo-Saronicos. If your trip starts in Mykonos or Paros there are fewer options to change the itinerary. The Micro-Cyclades, the sailing area below Naxos, can be an option but getting back to Mykonos or Paros with the Meltemi blowing is no option.

Sailing in the Dodecanese the islands of North-eastern Aegean and the Sporades when the Meltemi is blowing is more manageable.

Swimming and the meltemi winds

Anchoring and swimming is also affected when the meltemi is blowing. Even in a well protected bay the winds will make the boat swinging around her anchor. This will make swimming of the boat less relaxing. Paddle boarding and other activities are difficult as well.

Meltemi winds when chartering a yacht in Greece

It shouldn’t come as a surprise that the Meltemi winds when chartering in Greece can seriously affect your sailing trip. If you have booked a summer sailing cruise around the Aegean, you are warned that the itinerary is subject to weather conditions. This is not because the Skipper is lazy to take you to the Cyclades. It’s because they want you to have a safe, enjoyable experience onboard.

In extreme cases, even the high-speed ferries, hydrofoil, and other small boats may not depart from the ports. Even the bigger Greek ferries can be delayed.

If you are really in for a challenge and in need of a sailing adventure during the Meltemi season make sure you get the right yacht for the sailing area. Larger, heavier sailing yachts do better in heavy seas then light yachts or catamarans.