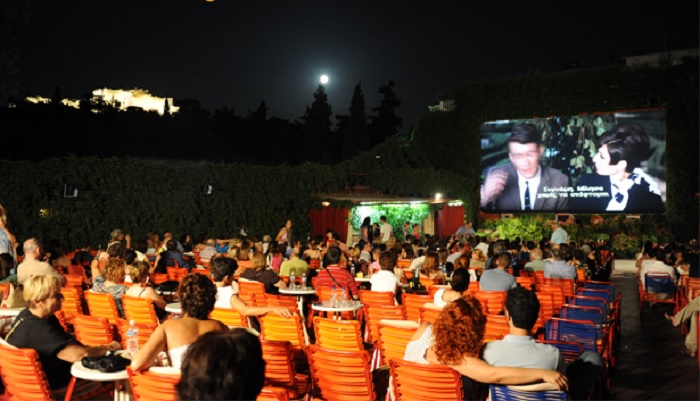 Open-air cinemas are a delight which very few countries can offer. While for Greeks, catching a movie at a summer cinema and sipping a cold beverage is like an institution, for visitors it is a one-off experience, almost as enjoyable as a dive in the cool, crystal-clear waters of Mykonos or a visit to the Temple of Zeus at Sounio.

Every neighborhood in Greece has one – some as old as the history of cinema itself, perched on a rooftop with a view of the Acropolis; others, more recent entrants, are right on the water, set to the music of sailboat masts swaying in the summer breeze.

Still, others are surrounded by perfumed gardens which fill the sultry evening with the quintessential Greek fragrance of orange blossoms and jasmine. With over sixty open-air cinemas to choose from in Attica alone, it is a Greek summer tradition that is truly alive and well.

Most Greeks can’t wait until their favorite summer cinema opens every May, eager to catch a movie in the open air, even if they aren’t crazy about the film itself. Most of the time it is simply an unmissable ritual, where even a date at the movie theater becomes instantly much more romantic.

Open-air cinemas, with their director’s seats, the smell of popcorn and jasmine from the nearby neighborhood gardens and the silently rapt audience watching classic movies on the silver screen give the seventh art experience a new dimension.

Under the clear, starry sky, downtown Athens has more than fifteen open-air cinemas welcoming cinephiles who would like to watch reruns of movies from the winter or classic movies which appeal more to the wider public. Black and white movies are a must for open-air cinemas, imparting the feeling of a bygone era which the audience can relive together.

With two films per night running, usually one at 9 PM and the other at 11 PM, you can purchase your tickets just 15 minutes before the performance, and you are also allowed to enjoy a drink or a snack in most open-air cinemas’ gardens.

According to the official website of the National Greek Tourism Organization, the summer cinema possibly originated in Egypt as a development of the ancient shadow theater tradition. Across the nation of Greece, and especially in Athens, the tradition was already popular before the First World War, when silent movies became talkies.

It has historically been one of the most affordable means of entertainment, and continues today, enchanting Greeks and summer visitors alike every year.