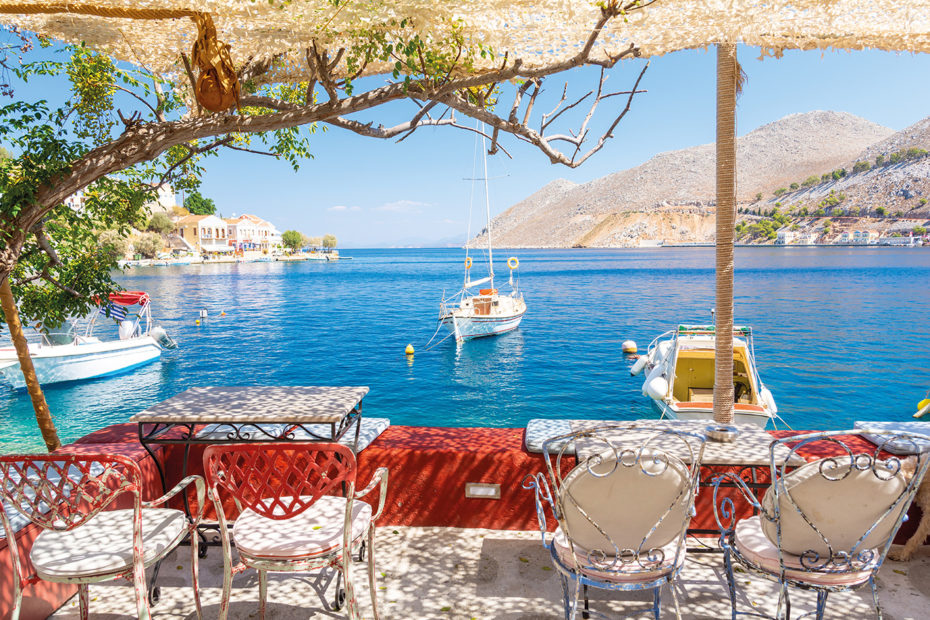 Greece, with its 6,000 islands scattered over the Ionian and Aegean Seas, lays claim to some of the most idyllic holiday destinations on earth.

There is something eternally romantic about sailing into a natural amphitheatre of rocky hills, hugged by whitewashed buildings.

And not all islands have airports or even ferry links, so a small cruise ship really is the best way to explore.

Not so long ago, all were the preserve of the rich and famous, but these days – happily – you don’t need a private yacht to enjoy your very own Greek-island odyssey.

Cruises tend to follow three main routes: Greece and Turkey (between Athens and Istanbul), Eastern Mediterranean (typically embarking in Venice or Athens and ending in Istanbul), and Greece only (usually sailing round-trip from Athens).

Whichever you choose, you should find that most sailing is done overnight, leaving you more time to laze on the beach
or trace the footsteps of Ancient Greece’s mythic heroes.

We’ve rounded up four Grecian gems to add to your cruising wish list: neoclassical Symi in the Dodecanese, car-free Hydra in the Saronics, Cycladic chart-topper Santorini, and verdant Skopelos in the Sporades.

So go on, dive straight in…

Located just off the Turkish riviera and named after the nymph who captivated Poseidon, this Southern Dodecanese island retains an irresistible allure.

Sea sponges brought riches to the island in the 19th century, and you can still buy them today along Aggelidi Quay.

The entire island has been declared an archaeological site, so swot up on history at the 18th century Panormitis Monastery, which boasts two museums and Byzantine frescoes.

Here in summer? Combine an overnight monastic stay with Symi’s cultural festival, held each year from July to September.

Secret restaurant: Away from the main drag, family-run Tholos is a locals’ favourite, with an enviable waterfront location on the coast road out of Gialos harbour. Graze on traditional taverna fare such as cuttlefish with squid-ink rice, and aubergine with lemon potatoes.

Secret sight: Visitors love Nimborio Beach but few know of its mysterious catacombs (Dodeka Spilea), a network of 12 underground tunnels that were used as artists’ workshops during the Byzantine era. The entrance is reached via a steep scramble up from the beach, past two small churches.

Separated from the Peloponnese by a narrow strip of water, this 25-square-mile beauty is honeycombed with donkey trails, inlets and hidden valleys.

With mules the customary form of transport, and no street names, it’s easy to slip into a bygone age – the same one that cast a spell on novelist Henry Miller and singer Leonard Cohen.

Hydra’s horseshoe port is a good place to stock up on amygdalota (a sweet almond delicacy) before hitting waterfront shops such as jewellery designer Elena Votsi’s whitewashed boutique.

Secret beach: Nestled into a small cove, Nisiza is one of several shingle beaches strung along the island’s pine-fringed southwest coast. Walk from Episkopi village or take a zippy water taxi.

Secret restaurant: Thin-crust pizza and shrimp ceviche are the order of the day at Caprice, Hydra’s long-standing Italian, which you’ll find 150 metres inland from the port in Hydra town.

Secret walk: For the best island views, make the pilgrimage to Prophet Elias Monastery. Head towards the Church of St Constantine in upper Hydra Town, then follow the black-and-yellow markers. Several cobbled switchbacks later, a steep half-mile final push and (in the words of Leonard Cohen), hallelujah!

Cloaked in olive groves, pines and almond trees, Skopelos is one of the greenest islands in the Aegean.

Pleasingly, modern life has a weak grip here. Sailing into port, you’re greeted by a peal of church bells from the steeply rising old town, which is guarded by the ruins of a 13th-century Venetian castle.

You won’t even scratch the surface of the island’s 400 (!) monasteries and churches, but if you have time for just one, make it Agios Ioannis Kastri, perched on its rocky outcrop above the waves.

Something look familiar about it? Yes, this is where they filmed the wedding scenes in Mamma Mia!.

Not an ABBA fan? Cycle along old mule trails with Skopelos Cycling, beach-hop in sea kayaks, or shop for local crafts (Ploumisti for rugs, Armoloi for jewellery and Nikos Rodios’ Gallery for black ceramics and a sight of the potter himself, working away at
his foot-pumped wheel).

Secret beach: If you like your own company, try Neraki Beach, where pine trees practically touch the azure waters. Rent a boat from Skopelos Town or swim from Chovolo Beach.

Secret restaurant: For a slice of the best goat’s cheese pie, head to Michalis Pie Shop. Ignore Google Maps and walk along the port, turning right before the National Bank. Take the first left, then a sharp right.

Its cliff-terraced sugar-cube buildings, sapphire-domed churches and barrel-roofed cave houses have made it the poster child of all Greek islands.

Santorini’s unique landscape is the result of a volcanic explosion that blew out the island’s interior around 3,500 years ago. To delve into its rich archaeological past, visit the ancient ruins of Akrotiri, then top up your tan on the black-sand beaches of the less well-known east coast.

Want to see that famous sunset? Escape the tourist crush in Oia and head for Imerovigli, a picturesque village in the north that’s nicknamed the Balcony to the Aegean. Then hit Fira’s buzzy boutiques for some retail therapy.

Secret beach: Bookended by Kolumbo and Vourvoulos beaches, Pori’s crystal waters can be reached from the sandy stairs opposite En Pori Studios guesthouse.

Secret visit: Eschew the bigger wineries for family-run Gavalas, where you can join in the grape-stomping, a 5,000-year-old summer tradition.