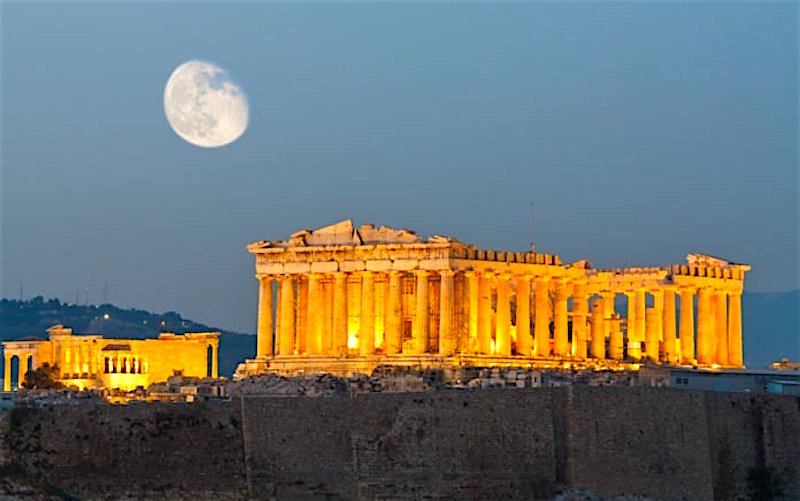 During the last years, the city of Athens has seen a dramatic transformation towards modernity. It has turned into one the most trendy cities of Europe, offering endless cultural events, exhibitions or concerts every single day and night. Street artists perform everywhere, and some have even left a personal touch of color on different walls around town.

However, Athens is; or at least should be, better known for the impressive temples and archaeological sites scattered downtown. Here are ten ancient sites to see in Athens.

1. The Temple of Olympian Zeus

A few meters from the Acropolis stands one of the greatest temples erected to honor Zeus. Works to build the Temple of Olympian Zeus started around 520 BC. It is double the size of the Parthenon and used to have 104 Corinthian columns. Today only 15 remain, as one fell during a storm in 1852 and now lies broken on the ground.

2. The Arch of Hadrian

Also called Hadrian’s Gate, this Arch dates back to 132 AD. It has stood dividing the ancient city and the Roman city of Athens. Two inscriptions on the arch, facing opposite directions, are still visible. The inscriptions name both Theseus and Hadrian as founders of Athens.

3. The Theatre of Dionysus

This major theatre at the foot of the Acropolis is dedicated to Dionysus; the God of wine, theatre, but also transformation. It seats up to 17,000 spectators and has perfect acoustics. It’s the oldest Greek theatre and it was here where many famous ancient Greek plays were performed for the first time. Some even consider it the birthplace of Greek tragedy.

4. The Temple of Asclepius

According to mythology, Asclepius, son of Apollo, is the God of medicine. His cult started about 350 BC; becoming very popular with pilgrim patients who underwent different stages of healing. There was a purification stage and an incubation stage, or dream therapy, during which the patients slept overnight in the temple.

5. The Odeon of Herodes Atticus

The Odeon was built in 161 AD by the Athenian Herodes Atticus, in memory of his wife Regilla. It is an impressive structure that used to be covered with a roof of cedar wood from Lebanon. It was destroyed in 267 BC and underwent restoration in the early 1950s. Since then, the theatre hosts concerts and other performances, mostly during the Athens Festival.

6. The Temple of Athena Nike

This small temple is in the Acropolis, on the right of the gate leading to the Parthenon (Propylaea). It is a good example of classical architecture that has been restored several times. Nike means victory in Greek, and it is here that Athena was worshipped as the goddess of victory in wisdom and war.

The Propylaea was a monumental gateway to the Acropolis. Its building began around 437 BC, and the columns have the same proportion as the ones on the Parthenon. This gate used to function as a checkpoint to control the entrance to the Acropolis, playing an important role in terms of security.

One of the most beautiful buildings in the Acropolis is the Erechtheion; a temple honoring Athena and Poseidon. It is better known for its balcony; the Porch of the Caryatids. The Caryatids are six beautiful female figures that function as supporting columns. Some of the original statues can be seen in the nearby Acropolis Museum.

Through the centuries, the most famous view of Greece; the Parthenon, has endured war, fire, revolutions, misguided restoration, and pollution. It has even functioned as a church and a mosque, and many parts today are either missing or were taken by other countries.

To read more about the restoration project, click here, or take a virtual tour of the Acropolis.

Not far from the Acropolis, down the slopes going through the neighborhood of Plaka, one can easily reach the Ancient Agora. Here, the restored portico; known as the Stoa of Attalos, hosts the Museum of the Ancient Agora.

Not far from the building, it is possible to visit the Temple of Hephaestus; one of the best-preserved temples in Greece, which allows one to imagine how temples used to look like in ancient times.