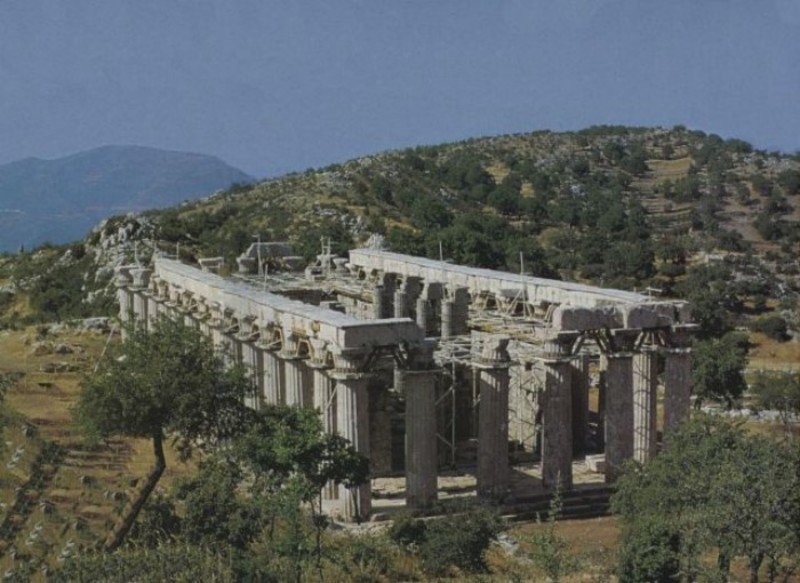 They call it the “Parthenon of the Peloponnese”. The columned temple of Apollo Epicurius is as beautiful as the Parthenon in Athens, as it rises within the sanctuary of Bassae in the mountains of Arcadia, near the border of the Messinia prefecture, and standing 1,130 meters above ground.

The temple is one of the best-preserved monuments of classical antiquity, a prime example of classical Greek architecture, as it combines both the Archaic and Doric styles. It was built at the height of Greek civilization in the second half of the 5th century BC (420-400 BC). It was dedicated to Apollo Epicurius by the Phigaleians, who believed the god of sun and healing had protected them from plague and invasion. According to ancient traveler Pausanias, it is attributed to Iktinos, the architect of the Parthenon.

The temple was discovered in the 18th century and attracted interest from scholars and artists. The isolation of the site contributed to the fact that many of its significant features survived largely intact. Part of the frieze of the temple was detached in 1814 and was transferred to the British Museum in London.

According to UNESCO, the temple is one of the earliest post-Parthenonian edifices and the earliest monument in which all three ancient Greek architectural orders – Doric, Ionic, and Corinthian – are found together. It also included the earliest surviving Corinthian column capital. The temple further exhibits a number of bold and innovative architectural designs that mark a turning point in the development of temple-building. The temple, as well as its sculptural decoration, consists of one of the best-preserved samples of the ancient Greek civilization, from the period of its heyday (5th century BC).

The temple of Apollo Epicurius was recognized by UNESCO as a World Heritage Site in 1986.

Source: The Peloponnese has its Own Parthenon (video) | GreekReporter.com