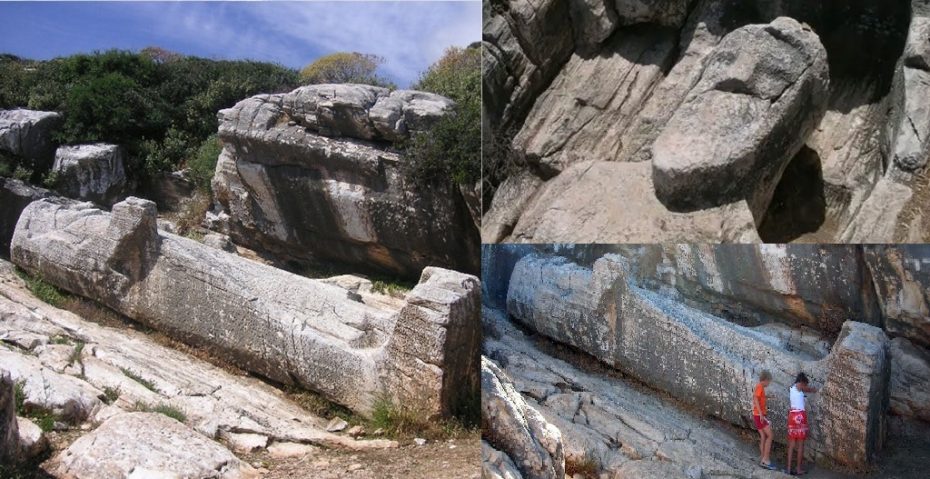 Naxos is a Greek island in the South Aegean, the largest of the Cyclades island group. Its fertile landscape spans mountain villages, ancient ruins and long stretches of beach. The namesake capital (also called Hora or Chora) is a port town filled with whitewashed, cube-shaped houses and medieval Venetian mansions. One of Naxos’ most distinctive and important sights are the three gigantic unfinished Kouros statues.

The kouros, a type of free-standing statue of a naked young man, that dates to the Archaic period of Ancient Greece. It was originally believed to pay homage to Apollo until the 1930s, when archaeologists noticed its beard and realized the figure was actually Dionysus.

It’s made of rough-hewn marble and is unfinished, cracked, and abandoned, but you can still see hints of the carvers’ handiwork. You can easily make out the shape of the body, head, beard, and ears. If you look closely, you can even see the holes left behind by the sculptors’ chisels, pickaxes, and hammers.

There are various theories floating around as to why the colossal kouros was never finished. The most plausible and well-regarded one is that it was too heavy to transport.

Source: This Ancient Statue of Dionysus Lies Unfinished and Abandoned in One of Greece’s Oldest Quarries. — Greece High Definition