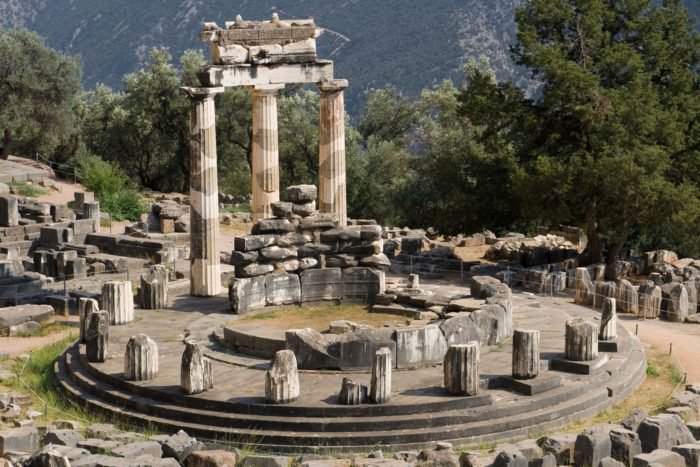 Greece currently counts with 18 UNESCO World Heritage Sites in Greece, 16 of them are inscribed on the list according to cultural criteria while the other two are included due to their natural richness as well; these two are Meteora and Mount Athos.

A few of the sites are located on the islands, while me majority of them belong to mainland Greece. This first site to be inscribed on the list was the Temple of Apollo Epicurius, in 1986.

The Acropolis was included in 1987 as a whole site that counts some of the greatest masterpieces of the classical period, such as the Parthenon, the Erechteion, the Propylaea, and the Temple of Athena Nike.

The city of Aigai (today Vergina) was the first capital of ancient Kingdom of Macedonia, and it was discovered in the 19th century in northern Greece. This archaeological site was included on the list in 1996 and it counts important monuments such as the palace and the royal tombs, one of which was identified as the tomb of Philip II, the father of Alexander the Great.

The archaeological sites of Mycenae and Tiryns are impressive remainings of the two cities that dominated the eastern Mediterranean from the 15th to the 12th century B.C.

Rhodes has also been declared a World Heritage City due to its Medieval castle and the citadel inside. According to experts, the castle of Rhodes is, one of the largest castles in Europe as well as one of most beautiful castles in Greece.

Greek mythology tells us that god Apollo was born on the small Cycladic island of Delos, in the center of the Aegean sea. This exceptional archaeological island is also part of the UNESCO World Heritage List since 1990.

Three monasteries are also part of the list, the Monastery of Daphni in Athens, Nea Moni of Chios, and Hosios Loukas in Phokida.

The old town of Corfu, added to the list in 2007, counts two fortresses in its historical center the Old and the New Fortresses. The oldest fort is located on an island joined the city through a bridge that was once made of wooden. In the past, high protection walls connected both fortresses.

The Paleochristian and Byzantine Monuments of Thessaloniki have also been introduced in this impressive catalog. They are the Rotunda, the temple of Acheiropiitos and Saint Demetrius, Latomou Monastery, the Church of Agia Sophia, the Church of Our Lady Chalkeon, as well as several other churches together with the Byzantine baths and the walls of Thessaloniki.

On the island of Samos, UNESCO included the ruins of the Pythagoreion, an ancient fortified port with Greek and Roman monuments and an aqueduct; as well as the Heraion, the temple of Hera of Samos.

The main monuments belonging to the Sanctuary of Asklepios in Epidaurus, particularly the theatre – a masterpiece of Greek architecture are also part of the list.

The famous Temple of Apollo Epicurius (Bassae) was dedicated to the god of healing and the sun. It dates back to the 5th century and it was erected on the mountains of Arcadia. It has the oldest Corinthian capital ever found and it combines the Archaic with the Doric orders.

The Chora or historic center of the island of Patmos, together with the fortified Monastery of Saint John the Theologian and the Cave of the Apocalypse. Patmos, known as the island where St. John wrote the Apocalypse, is famous for its monastery and the old settlement beneath.

Phillippi is the most recent addition to the list. The remains of this walled city are located in north-eastern Greece, on the ancient route that connected Europe to Asia, the Via Egnatia. Founded in 356 BC by the Macedonian King Philip II, this city developed as a small Rome. The vibrant Hellenistic city of Philip II was supplemented with Roman public buildings such as the Forum and a monumental terrace. The remains of its basilicas are a clear example of the early establishment of Christianity.

Meteora, as well as Mount Athos, are the two monuments introduced to the UNESCO list not only for their cultural richness but also for the natural characteristics of the surrounding landscapes.

The unique tectonic formations of Meteora, in Kalambaka, are supposed to date back 30 million years, when the sea covering the area started to recede. On the other hand, Mount Athos is surrounded by wild forests and steep cliffs and can only be visited by men in possession of a special pass. The complex includes twenty monasteries and its capital in Karyes.