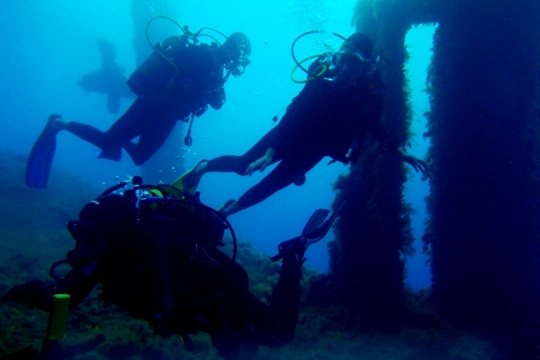 The profound geological changes in Greece and throughout the Mediterranean sometimes resulted in the submergence of entire settlements. On your next visit to Greece explore the following submerged cities by swimming or diving amidst the streets and monuments of a former mainland.

In Greece from the prehistoric to the early Byzantine era, numerous submerged ancient sites were found beneath the blue seas! The Visit Greece team gathered some of these sunken cities that are worth to pay a visit in person. The magical landscape will most certainly reward you!

Under the Greek sea

Start your adventure in southern Evia on Cape Kafireas, where lies the settlement known as Archampoli or Charchampoli, a name that is probably a corruption of the words Archaia Poli (meaning ancient city). Here you can clearly see sections of the submerged ancient settlement in the shallow waters from the cliffs next to the sea that will make your visit worthwhile. In Attica, explore Pountaleza in Lavrio which has been partly submerged, as has the Port of Avdira, in Thrace.

You can also discover many sunken cities in the Peloponnese, such as Salanti in Argolida and the settlement of Methoni. At Pavlopetri in Laconia, the town of Voies, mentioned by Pausanias in his book Lakonika, sleeps beneath the waves; it has been recognized as the oldest submerged town in the world. It sank in the 4th century AD due to an earthquake. The scale of the seismic event advanced the phenomenon of sandification of the coastal soil, converting huge expanses into quicksand in a moment. This geological phenomenon resulted in the separation from the mainland of the peninsula known as Onou Gnathos (meaning donkey’s jawbone) and the formation of the present-day island, Elafonisos. Archaeologists have discovered fragments of items in daily use, such as cooking utensils, ceramics, pitchers, storage pots and finely-crafted drinking vessels, which were probably kept for important guests or used for offerings to the gods. Imported vessels originated from the greater area of the Aegean Sea and Minoan Crete. The nearby town of Plytra was also submerged creating an incomparable underwater seascape.

These and many other cities, once filled with life and glory, now provide a mythical setting where one believes mermaids and creatures of the imagination live. The cities of the deep, fascinatingly mysterious, lie in the blue silence awaiting bold explorers!