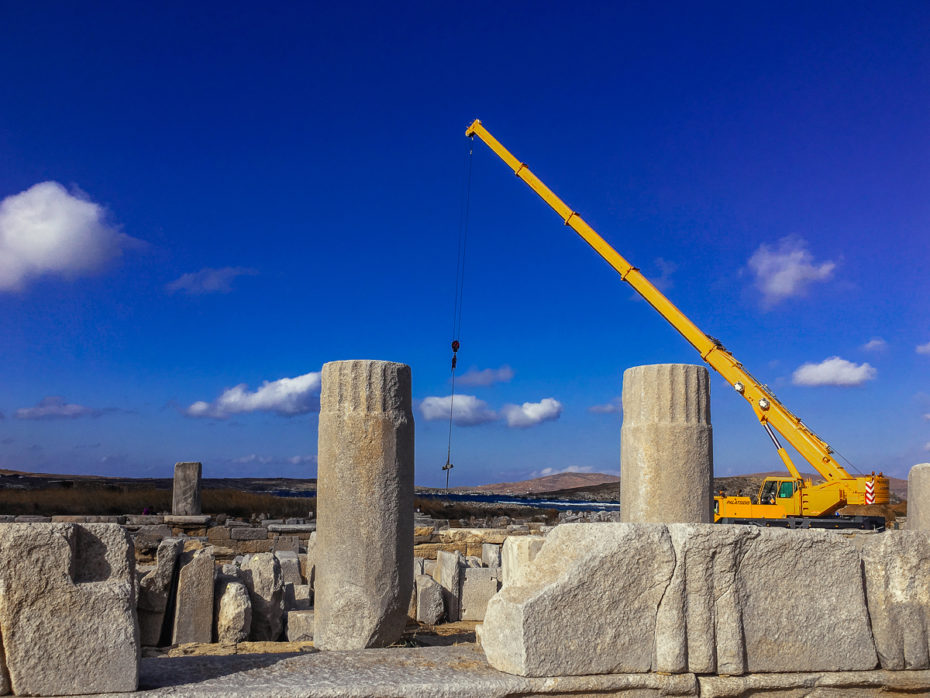 .entry-header DELOS, Greece – All the preparatory work before reconstruction begins on a major ancient public building on the island of Delos has been completed, the Ministry of Culture announced on Thursday.

The reconstruction of the marble Stoa of Philip V is being funded by the Paul and Alexandra Canellopoulos Foundation at a total cost of 550,000 euros, and the work will be undertaken by the Ephorate of Antiquities of the Cycladic Islands.

The stoa – a long portico fronted with a series of columns – is south of the Temple of Apollo, the island’s main attraction since antiquity, and is close to the port. The building was approximately 11 meters by 71 meters and only the foundation stones remain in their original location.

A dedicatory inscription attributes its construction to Philip V, who reigned in Macedonia from 221 to 179 BC, before being defeated by Rome.

Among other things completed this year, the ministry said, was the clearing of an area west of the stoa measuring around 600 sq.m. “The sight of the scattered ancient material after the clearing up was impressive, as there were 1,000 pieces, of which about 900 were part of the architecture of the stoa.

The laborious project of methodical recovery, identification and temporary classification per type was carried out by specialists with the use of a large telescopic crane, delivered to the island on an open ferry from Paros,” the ministry said. Another 300 pieces were found in another two areas close to the port and were identified and cataloged.

“Works on the reconstruction of the Stoa of Philip V are expected to continue at a sustained pace throughout 2018,” the ministry concluded.

Source: Groundwork Prior to Reconstruction of Stoa of Philip V on Delos is Complete – The National Herald