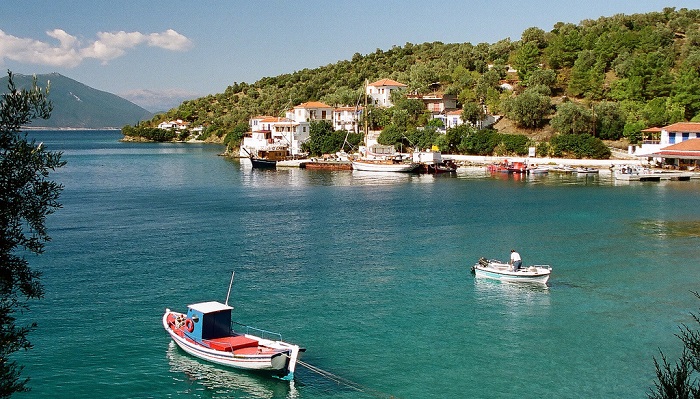 Sailing off the beaten path in Greece: The tiny island of Trikeri in the Pagasitic Gulf off the end of the Pelion peninsula is one of Greece’s lesser-known idylls.

There are no cars on the lush green island. There are some narrow lanes, but no actual roads, and most of the island’s infrastructure consists of hiking trails. The island’s port area features just a few tavernas and small shops.

In less than one hour one can go from one side of Trikeri to the other on foot, exploring the  lush vegetation and the pristine pebble beaches while enjoying stunning views of the Pelion peninsula.

Perched atop the highest point of the island is the imposing Monastery of the Annunciation of the Virgin Mary.

One of the reasons the island has seen so little human impact is because in the eleventh century the island, then called Palaio Trikeri, was abandoned. It was seen as rich pickings for pirates, and its coves and inlets were the perfect places for pirates to hide their booty.

All Palaio Trikeri’s inhabitants moved to the mainland. It was only in the eighteenth century, when a monk decided to go and live there, that the island saw its first real inhabitant in centuries.

Legend says that the monk found a lost icon of the Virgin Mary and built a church next to the ruins of the old one, so he could house the icon there. The construction of the monastery began in 1827.

Political Prisoners of the Greek State

However, this quiet island paradise has a haunting past, because during and after the dark years of the Greek Civil War it was used as a concentration camp.

The first prisoners to arrive in 1946 were men who had been accused of political crimes. They were mostly men from the districts of Epirus and Thessaly who had participated in the EAM-ELAS resistance movement during WWII.

In 1947, the men were relocated to other camps and the Trikeri camp was used for female pro-Communist political prisoners who had been captured during the Greek Civil War.

When the women, many carrying babies, landed on the deserted beaches of Trikeri they were pleasantly surprised with the stunning views and the green landscape.

The reality of the camp, however, soon shattered any hopes that their imprisonment could be a holiday in paradise. Many of them were forced to sleep on the ground, food was inadequate, and healthcare for the children was non-existent.

Many survivors also spoke of beatings and other forms of torture by the guards, turning what was supposed to be a camp for political prisoners into something more akin to a concentration camp.

In September 1949 political activists from other camps were sent to Trikeri island, increasing the number of prisoners held there to 4,700. The camp closed in 1953, when the last prisoners were released.

There are no traces of the ugly past on Trikeri now, and surely that’s they way it will remain. Its serene landscape continues to welcome visitors, and its turquoise waters lend even more beauty to the idyllic island which once brought misery to so many.

Source: The Dark Secret of The Greek Island Paradise of Trikeri | GreekReporter.com