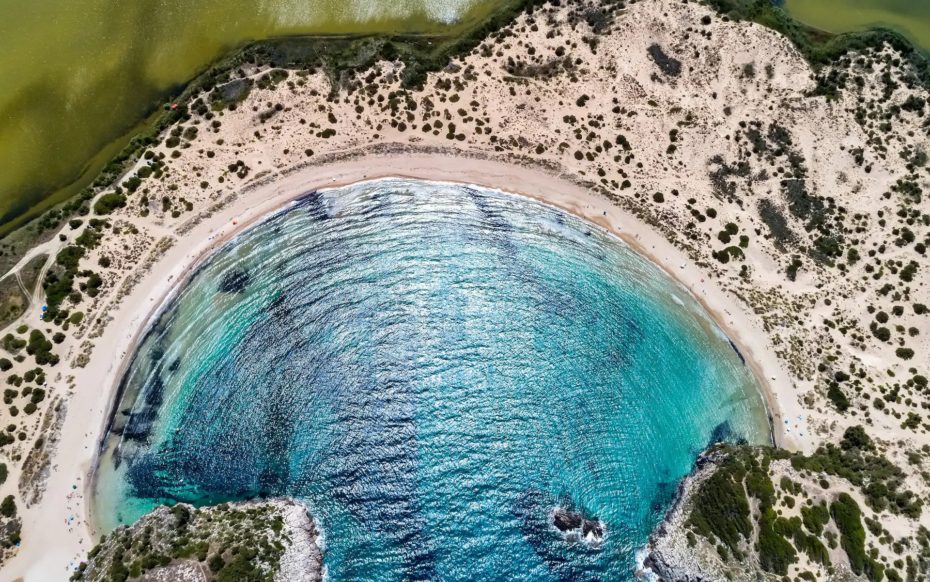 The first prize for the most un-Greek experience in this country of sandy beaches, crystalline waters and sun-bleached landscapes must surely go to the Odontotos (“Toothy”) rack railway, so take a ride on a train that’s more Swiss than Greek. Running for 23km from Diakofto to Kalavryta and designed by French engineers, its twists and turns through a mountainous, inaccessible part of the Peloponnese that bring the Alps to mind. Thick forest? Check. Steep inclines? Check. Lush canyons? Check.

Beyond the beautiful beaches and charming villages of Amorgos, there is one extraordinary sight to behold: the Chozoviotissa Monastery that clings to a cliff 260m above the sea. Founded in the ninth century by Syrian Christians, it’s still inhabited by a few monks. They’ll be delighted to welcome you and treat you to their homemade ‘rakomelo,’ a kind of brandy with honey (daily 8am–1pm, 5pm–7pm, donation expected).

The Cave of the Apocalypse

It’s only a five-minute drive from the port of Patmos to the Cave of the Apocalypse, but a journey of 19 centuries back in time. It was here, according to tradition, that an exiled St John had his visions of the Antichrist, the Four Horsemen and the Seven Seals composing the Book of Revelation. Today, you’ll find a silver mitre lies atop a natural alcove where the saint supposedly laid his head and a silver bracket on the crack where he put his hand to get up. It’s all enclosed within a 17th century chapel and impressively atmospheric (8am–1.30pm, occasionally afternoons, €2).

In Pyrgos, on the island of Tinos, marble is everywhere. Churches, houses, streets, fountains, arches… there’s even a solid marble bus stop. This is because Pyrgos is the historic home of a school of marble sculpture and it offers no fewer than three museums: the first showcasing contemporary talent, a second dedicated to Yannoulis Chalepas, native son of Pyrgos and the most lauded sculptor of modern Greece (€3 for both, hours vary), and finally the extensive Museum of Marble Crafts (Wed-Mon, 10am–5pm, €4) that explores Greece’s special connection with marble since ancient times. Alternatively, visit the cemetery for free: it feels more like an art gallery than a burial ground.

Tinos wasn’t the only island whose marble was highly sought after in antiquity. Naxian marble, still extracted today, had an excellent reputation, because it’s hardy and frost-resistant. At the Apollonas quarry you can still see a gigantic Kouros (an archaic, stylised male statue) half-chiselled out of the rock. Two smaller examples lie in the less accessible village of Flerio. Like the moai on Easter Island, nobody knows why they were abandoned there 2,500 years ago. Did the stonemasons down tools because of a strike? Did the commissioning client question the fee? Did a sudden calamity befall the workers? One thing’s for sure: made of Naxian marble the statues have weathered the elements well.

With 1,300 species of mushrooms growing in the thick oak woods surrounding it, the mountainous town of Grevena in Greek Macedonia deserves its title of Mushroom Capital of Greece. Grevena claims a mushroom museum, a slew of tavernas serving forest fungi in pies and soups, public mushroom sculptures and shops that sell mushroom T-shirts as well as spoon sweets and alcoholic liqueurs made out of mushrooms. Drop in on the annual four-day festival at the end of August for fungi nirvana.

Vandalised, crumbling and decidedly creepy, the dilapidated sanatorium on top of Mt Parnitha, north of Athens, looks perfect for the set for a horror movie. Legend has it that it’s haunted, but what elevates it to Blair Witch levels of spookiness is the Park of Souls opposite. Sculptor Spyridon Dassiotis has carved free-standing tree trunks – blackened remains of a forest fire – into twisted human figures to portray the pain of the patients.

The only place in Europe where you can find African chameleons is the Gialova Lagoon, a biosphere reserve in south-western Peloponnese. It is thought they were brought to the region as pets during the Roman period. You can spot them during a chilly spring night when they are lethargic and move about more slowly by shining a torch on trees in the south of the reserve. Resort Zoe, just below the lagoon, has a good record of locating there endangered critters (www.zoeresort.com).

Do touch the exhibits

The only Greek museum where you’re encouraged to handle the exhibits is the ‘Lighthouse’ in Athens, where the visually impaired can feel exact replicas of many famous Greek sculptures, vessels and other with notes in Braille. Even if fully sighted, hop on a bus A2 or B2 at Syntagma square, get off at stop ‘Chrysaki’ and poke your way through a model of the Acropolis and full-size statues of Venus de Milo or the Charioteer of Delphi. (Mon-Fri 9am–2pm €2, free for persons with disabilities).